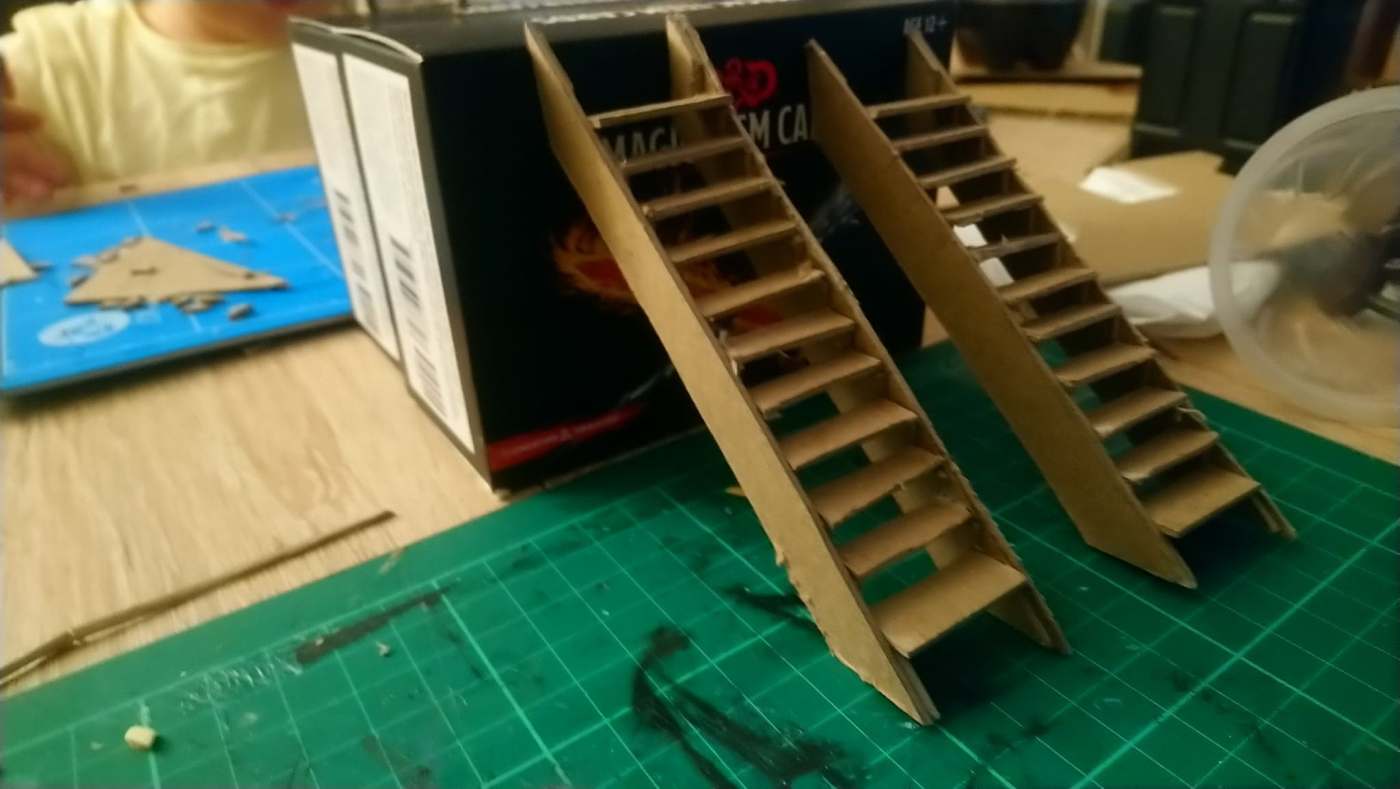 I saw a crafter on YouTube make stairs with this method, though he didn’t go through the process or measurements in great detail, as the stairs were just part of a larger project/build. But I thought they looked great, the method was simple enough, and I picked these to try my hand at for my third small project. The end product looked great, and would be versatile for fantasy or sci-fi settings depending on paint scheme.

Cost: around £0.49 (or less) for three sets of stairs shown. To make these three sets, I used one sheet of chipboard (with plenty left over). I got 25 x A4 sheets of chipboard for £12.18 on Amazon, and a set of three craft knives from Hobbycraft for £2.75. The craft knives are basically a must for crafting, but I won’t factor into the individual project price.

Obviously, the price above is not including whatever adhesive you like to use, as the amount is negligible for costing purposes. I used mod podge, but other glues would probably do fine. As for the ruler and pencil, prices range and the “usage” is also negligible for cost of individual projects.

Difficulty: subjective! This was the third project I tried my hand at, and took less time but more energy. Accuracy is a little more important, so I found it harder than the others. Also, cutting. I have issues with my hands, so this was an unpleasant one. If you have a steady hand and can cut straight lines without hurting yourself, then its pretty straightforward. Looks great, and works if it’s a little messy either way, but there is a lot of cutting involved. It’s also quite fiddly to keep everything lined up when gluing the steps in place.

I experimented a little with the measurements to get something I liked, but what works for me might not work for you. Regardless of the height of the stairs (I went with something that would equate to 15ft in my tabletop game), I found that the cut-outs for the stairs worked best at 1cm x 1cm, and the rungs at 2.7cm width; it still works on the 1″ grid and your models will fit on the steps if the characters finish their movement there.

When you’ve stuck all the steps in place, which can be a bit fiddly if you struggle with patience (like me), that’s really all there is to it. You’ll notice that my cuts are rough, and the steps are uneven. But it still works. No, these stairs aren’t going to win any awards, but for a medieval fantasy setting, I argue that things wouldn’t be perfectly even. Maybe the tavern owner doesn’t care enough about health and safety to keep getting the stairs realigned.

Even unpainted, these are perfectly acceptable on my home DnD table. When they’re painted, these will be pretty smart bits of scatter terrain, and I’m actually very proud of them.

The main youtuber I watch for this stuff is Black Magic Craft, and he makes things as accessible as possible. I’d highly recommend checking out his videos on YouTube if you’re interested in getting into making your own terrain.

Even with the multitudes of helpful tips and cost effective builds, I still took forever to get past the barrier of anxiety and excuses I built myself.

This was the first (and so far only) project that I didn’t steal the concept or full build from Black Magic Craft. The video that contains the stairs and method I tried to use is here:

I have no experience at all in this kind of thing. That should be pretty obvious in the rough quality of my work. I have no head for this stuff, I’m not endowed with practical skills, and I have no idea what I’m doing.

If I can do it, anyone can.

If, like me, you have watched crafting videos with awe and appreciation, but been too intimidated to try it yourself…what are you waiting for?