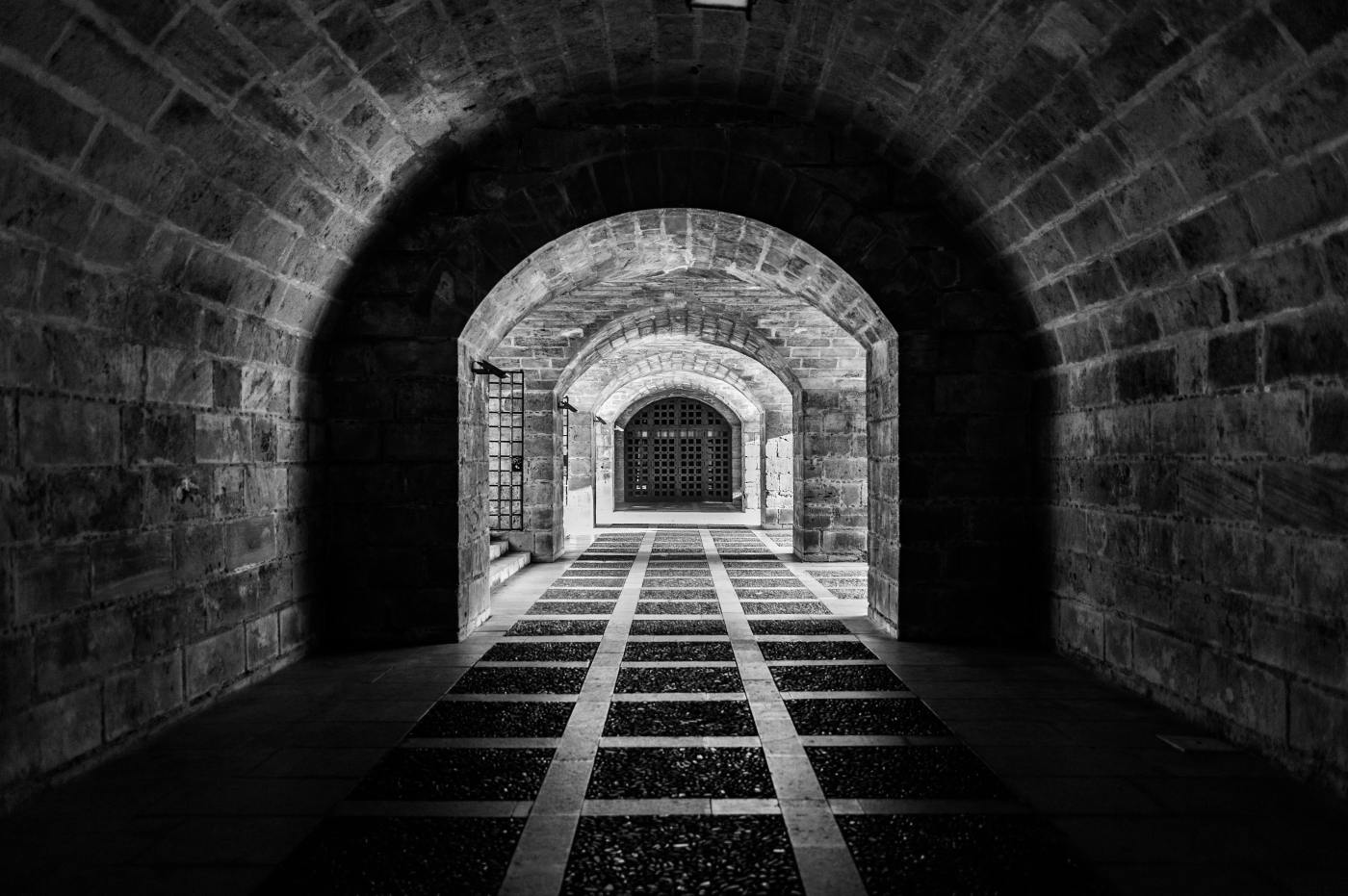 As the priests, and the rest of their group, rushed up behind them, Catryn was glad for her mask. Her legs were shaking but the wolf masked the haggard expression on her face. They needed to be professional; they had been hired for a job, and the priests needed to know that Iron and Bone could protect them. Not that she ever wanted more work from the temple.

Their expressions, the panic melting into shock, were almost comical after such a harrowing encounter. Ahren refused to look at her as the others addressed him, and she suspected that he was as disturbed by the situation as she was. One of the Covenant monitored the far edge of the passage for more threats, and the others stood vigil over the priests.

Wolf soon slunk away to join the sentinel; the priests’ magic was unsettling. It was similar in some ways to her own, but that just highlighted the differences. Her magic came from her; it was an innate ability. A gift, and a curse. The priests were conduits for something far greater than she could even conceive. The echo of that magic moving through the air around her was unnerving.

The priests made short work of banishing the wayward souls back to Valonde, the Gatekeeper’s realm, between the worlds. They wanted to linger, to finish the full rites and entomb the bodies once more, but the Covenant reminded them of the urgency. It would take them days to put everything right, but they could not begin until the primary issue was resolved.

The group moved on. One of the temple guards joined the scouting party, his glaring white robes standing out like a beacon in the torchlight. Staying hidden would not be so easy, but the sconces on the walls were already hindering them in that regard. It was doubtful that the undead creatures were relying on sight to find them either way.

When Wolf quietly asked for his name, the temple guard bowed his head and murmured “We give up our names, as the priests do, in service to the Gatekeeper.”

The Gatekeeper had no face or identity of his own. It was said that he could adopt the personality and memories of any face that had passed through the Gate. It was unsurprising, then, that the members of the temple chose to abandon their identity to serve. “What would you have us call you?”

“Thorn will suffice, should the need arise.” He bowed his head deeply in understanding. Their hushed conversation ended, and they stepped carefully through the passageways. Wolf took great care not to disturb any of the caskets in the walls. She was immensely relieved when Ahren sent Rynir to the back of their squad; he, too, was worried that something would attack from behind. They tried not to stray too far from the others for that reason alone.

Thorn proved himself an accomplished fighter, and more experienced that Wolf would have expected. A few more clusters of shambling remains, in various stages of decomposition, were handled with relative ease due to his knowledge. The dead had never walked in the catacombs before, as far as they knew, but it was something the Covenant of Thorns trained for.

When flickering blue light caught their attention, Thorn threw a hand in front of them, halting their approach. The glance Wolf threw around the corner granted her vision of three shifting, incorporeal creatures. Bodies half-formed of ethereal blue mist, glimmering in the shadows. They resembled wolves, to Catryn’s dismay, but they were each the size of a bear.

Behind them, a massive hulking figure waited. Catryn’s senses made up what her eyes did not capture, and she knew these were the skeletal remains of an ancient Ungarhek warrior. They must be getting deeper within the catacombs; the Ungarhek had not lived in the Variden Mantle for centuries. The bestial spirits must have been his companions. Her stomach lurched at the thought, contemplating her own familiars.

Brushing her trepidation aside, she silently relayed what she had seen to Ahren and ducked back behind the corner. They could hear a large metal blade, scratching along the stone floor, dragging slowly closer. Ghostly whimpers and whispers filled the air, and the temperature dropped once more. They held their breath as they considered the options, but they all felt the change in the air as the beasts caught their scents.

Bone chilling howls reverberated through them, and Wolf instinctively braced herself against the wall. If a wolf knocked you onto the ground, they would rip into you without mercy. Pressed into the solid surface, she could keep them in her eyeline as they rounded the corner.

What she hadn’t considered was their ethereal nature. Of the three beasts, only one chose to attack from the front. The others charged through the tunnel wall, one lunging straight for Catryn as it slipped easily into her guard. Jaws snapped at her face and she barely managed to throw her arm up in time to take the brunt. Ice shot through her veins, sapping her strength and draining the warmth from her, but she snarled into the beast’s face.

Like her wolves, it had not expected the tiny human to face it down. She took advantage of the moment of hesitation to draw a baton and smack its snout. The baton passed through, as she ought to have expected, and she took the force on her own wrist. Still, the beast yelped and leapt back as the glowing silver etchings passed through its form.

Catryn ignored the sounds of combat around her; if she took her eyes off the beast, it would devour her. Her arm was numb, a strange sensation bleeding through where its teeth had pierced, but her head was high in a challenge. It prowled anxiously, but its undying loyalty won out and it leapt again. She dove aside, letting the creature slip back through the wall, and cursed as a second one followed its path. A sickening crunch followed, and Wolf saw Rynir had been dragged by his shin. The creature had passed through the thick stone, but Rynir’s form was not as malleable. The momentum alone must have broken his leg, and what she could see of his skin was turning blue.

Ahren was fending the third creature off with his silver shield, and Thorn was hastily fumbling over a ward. Catryn hurriedly dragged Rynir into the centre of the hallway and drew her longest baton. The movement in her left arm was limited, but she was clearly faring better than her unconscious ally. How much longer would remain to be seen.

While Ahren kept the third beast engaged, the other two bounded through the walls. Thorn was rapidly chanting, holding his amulet to his chest, and shimmering lines were slowly peeking through cracks in the stone. The beasts ignored him, both focused on their previous targets. Catryn lashed out at the one snapping at Rynir, but her distraction was rewarded with another set of jaws clamped around her arm.

The sting of pain was lessened by the numb sensation spreading up to her shoulder, but that brought her little comfort. Ric was suddenly at her side, a thick silver chain wrapped around the throat of the creature on her right. He dragged it back, away from her and Rynir, and she gratefully turned her attention to the creature holding her in place.

Readying her weapon to strike, Catryn froze when she saw the deep agonising rage in its eyes. She knew well the expression of an animal in pain. Though every muscle screamed in protest, she dropped her weapon and touched the creature’s head instead. “This isn’t the way, my friend.”

Usually, she needed skin contact to connect with another creature. As this one had its ghostly teeth firmly locked in her forearm, it didn’t appear to be necessary. Wolf closed her eyes and the world melted away. In front of her, the sharp blue form of the beast was vibrant and clear, and she reached out. “We’re here to help make things right. You can rest now.”

The creature released her arm with a soft whine, and lowered its head. Slowly, she rested her forehead against the top of its snout. The beast quietly lay down at her feet, curling protectively around her, and closed its eyes. The others howled gently, and followed suit, each losing their harsh blue colour and adopting a pale white hue.

Thorn finished the ward, and the beasts slowly faded away into its blinding light. Instead of being forced back, they went with peace. The formidable hulking skeleton had reached them just in time to be cleansed by Thorn’s enchantment, and the armour and bones clattered heavily to the ground. But the soul’s rage lingered, humming through the air around them.

Ahren dropped slowly to her side, to check that Rynir was still breathing, and murmured “That is a very good question. But, for now, we get Rynir back to the others.”

He lifted Rynir easily, and they made their way back to the priests. Luckily, they were not too far behind with the time it had taken to finish the confrontation. Once Rynir was bathed in the light of a purification ritual, to slow whatever necrotic energy the beasts had released, Thorn asked “Is that why they call you Wolf?”

“One reason, of many.” Ahren interrupted, his calm voice giving nothing away. “You need to get that arm looked at.”

Catryn knew better than to argue with him, especially when he was right. They still had a way to go, and her stubborn pride could get them killed if she refused. The younger priest was tentatively hovering at Ahren’s back, so she nodded and held her arm out to him, removing her glove at his request.

Unlike Rynir, her skin had kept most of its colour. But there were streaks of lightning arcing across her skin, where her veins were pulsing with unnatural radiance. The greatest surprise for Catryn was that her arm was still intact. A beast of that size should have easily crushed her bones.

Warmth coursed through her arm and feeling came back with a prickling tenderness. Wolf flexed her hand, relieved to find it already returned to normal. The luminous blue receded from her hand and she nodded gratefully to the young priest.

“How did you do that?” Thorn approached and stood over her, brown eyes narrowed suspiciously.

She bristled at his tone and irritably hissed “Wolves like me.” She clapped a hand on the young priest’s shoulder briefly before getting back to her feet. Rynir was coming to consciousness, and they were all anxious to be on the move. His movements were still sluggish, but they were too deep in the catacombs to send him back to the temple alone. After a quick discussion, they decided to stay together so no one member was caught unawares.

Kihyun spared one of his javelins as a crude walking stick, to keep Rynir steady. As long as he didn’t need to move quickly, Rynir insisted he could still protect the priests. As they approached a massive, heavy iron door, Wolf knew that it wouldn’t be long until they could test whether his confidence was misplaced.

Hello there! If you made it this far, consider hitting that Like button, or drop a comment to let me know what you thought. If you want to make sure you don’t miss the next post, click that follow button to get email updates!

One thought on “Iron and Bone – Chapter Eight”